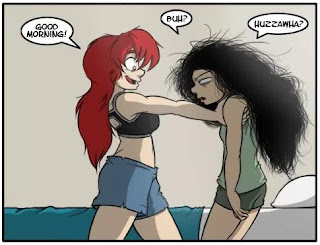 Themes: B
Story: B+
Characters: A
Comedy: B
Visuals: A

Mastery is an amazing comic by Ryan and Krystle about a mistreated girl crawling her way out of her older sisters shadow with the help of her only, and first, friend in the world, who beats the crap out of her. It is a story of emotional turmoil, amazing romance, subtle prejudice, and a fairly realistic representation of the Loony Friends Improve Your Personality trope.

If the rankings and prelude have persuaded you, then stop here and get on with reading already! If, however, you are not yet convinced, or have already read Mastery, and simply wish to see my analysis of it, then read on:

Themes:
One of the many things that Mastery does quite well is interweaving several major themes into its story without any of them feeling crowded or out of place. It handles homophobia in a subtle, and I expect, more realistic way. It surfaces in the form of a sister being suspicious of the protagonists having compassionate contact, or in the protagonists going to prom 'as friends'. The romance in Mastery, at least in the first part, is slowly built up, and starts out as a friendship. The characters confide in one another, one having had a near death experience, and the other being isolated by her own family, until eventually they admit their mutual attraction to themselves. But what's all this about? What do I mean by 'first part'? Well...

Story:
At the time of this review Mastery is split into, effectively, two segments. The first segment, the Prequel, functions as a complete story revolving around Min Hau and Rei Haiyaou, martial arts students who carry out a journey of such heartwarming romance and laugh out loud comedy that I would gladly buy a book form of just the Prequel without any hesitation. The Prequel is down to earth, realistic, and wrapped up with a lovely ending. The second segment, Act-1, has magic. Now, obviously, there's nothing wrong but magic in a story. But, Act-1 differs from the prequel in a very substantive, and downright dangerous way: Genre. Act-1 isn't quite developed enough by this point for me to say for sure, but based on the large amount of exposition, world building, and super powers going on, it seem quite likely that it will differ dramatically from the prequel in tone. This is half of the problem with Mastery's story structure. The other half, is that there is very little transition between the prequel and the Prologue, a ten page primer for Act-1. The Prequel ended, and with a very nice ending at that, and I expected the story to start up again with the same characters after a bit of time had passed. Instead, I felt like the story had jumped to an entirely different thematic universe. Now, Ryan has said that Min and Rei will show up again at some point, so there very well might be a reason why Act-1 couldn't start with them, but a better transition is still in order. For a fast and dirty fix I would slap a black page in the archives that said "X years later, and Y miles away". It's just a band aid, but I still think it would help. For a more sophisticated approach, I would probably start a page with two or three panels of Min and Rei in the present day talking about Derrick Franklin and Star Eater, the focus of the prologue, and then do a fade to black style transition to a final panel of Derrick in his car, the way we first see him in the prologue. Alternatively, Prequel could be put under a separate archive page, so that the expectation of continuity isn't quite so strong. But anyway, I haven't put much context in here have I? let's remedy that.

The plot of Mastery goes as such: Min is being mistreated by her family, especially her sister. Rei shows up and beats Min's sister in a sparring match. Min and Rei bond, and Rei starts training Min the beat her sister before Rei has to leave. They fall in love, or at least grow very close, as they don't actually officially become a couple until the epilogue of the prequel, and Min partially comes to terms with her sister after she finds Min and Rei confiding in eachother. Rei leaves after promising to come back, and Min finally has her fight with her sister, defeating her, and finally getting the respect she deserves. The prequels epilogue shows several years passing, there's a bookend, and then the Prologue starts.

In the Prologue an extraterrestrial, and possibly extradimensional, lifeform possesses Derrick with the intent of consuming the world. Then Act-1 Starts. In Act-1, our new protagonists, Sarrah and Ash, are walking home from school one day, when Sarrah sees Derrick. Sarrah chases Derrick, gets cornered in an alley by some possessed school kids, stabbed, and this causes her superpowers to awaken. (I say awaken because I think they were given to Sarrah in a dormant form at the start of Act-1 by the same extradimensional being that possessed Derrick.) Then Sarrah and Ash go home, experiment with her new super powers, producing weird blue flames, and go to bed. Then they get woken up by beings from beyond the veil, which feed on their fear. Then some other dude shows up and tells another dude that the extradimensional being has come to consume the world. Then Sarrah and Ash wake up in the morning and talk about how great their hiding-in-the-closet sex was.

Do you notice the gap in the plot? you should. After all, that's why I put the paragraph break there.

Despite this, Act-1 still seems like a good story, and the Prequel is an amazing story! It's just the transition that's the problem.

Characters:
Min is a well executed character, but analytically uninteresting from my point of view. She's frustrated, spunky, confident where she can be, a great teacher, and silly. I love her, she's adorable, but there isn't much I can analyze with appropriate scrutiny. Instead, I'm going to focus on Min's sister, Xiu Mei, and Rei. 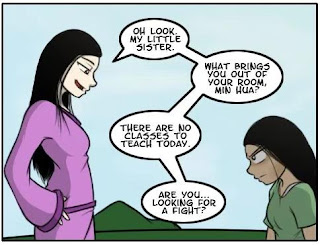 Xiu serves as the most obvious antagonist in the Prologue, being the one threat Min has to overcome; and while she starts out as a fairly black and white villain, she grows into a quite complex character in a very well written way. Xiu plans to leave someday, leaving Min alone, and thus does not wish to be the one Min relies on. Xiu fears that if she is the only one around to support Min, that Min won't be able to support herself when Xiu finally leaves, so she berates, fights, and mistreats her instead. A misguided position to take, but a believable one, especially when coupled with the later revealed fact that Xiu partially blames Min for the death of their grandmother. All of this comes together to make Xiu Mei a complex and believable character, who both cares for, and resents Min, causing her to behave in a similarly mixed way.

Rei on the other hand, is an example of the kind of person I have only known once in my lifetime. She is emotionally open, expresses her feeling honestly, isn't ashamed of herself, and feels open affection for many people. She is also mischievous. Rei's character doesn't extend much deeper than that, but she is exceptional in just how well executed this aspect of her character is. (although, in my experience, this kind of person tends to attract friends like a magnet rather than pushing people away) 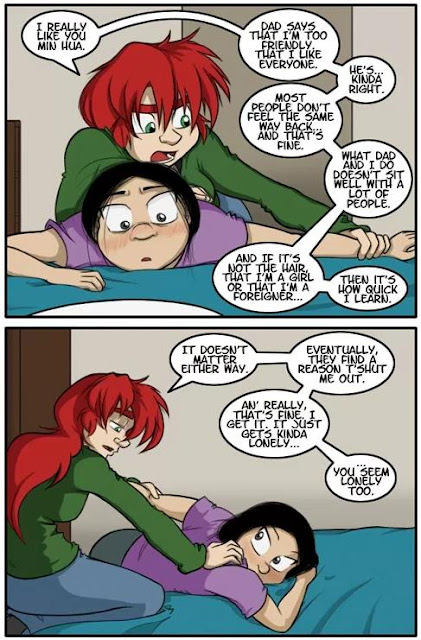 Moving on to Act-1, almost none of the characters besides Sarrah and Ash have been developed yet, So I will briefly talk about them. Sarrah is a tall athlete with blue hair and is more easily embarrassed. Ash is short, does not have anime hair, and is quite forward. In truth, most of the significance of Ash and Sarrah, as far as I'm concerned for analyzing the comic, comes from the obvious parallels with Min and Rei. Although, really, I just think the authors like depicting a smaller girl wrapped around a larger girl. And I approve.

A comics visuals are comperable to the directing in a movie, and there are some key things done quite well in Mastery that I would like to give attention to:
The first is this scene to the right here. Notice how Min's hand is clutched around the ruffled end of the blanket? It's just an amazing detail that really enhances the concern and anxiety shown on her face. 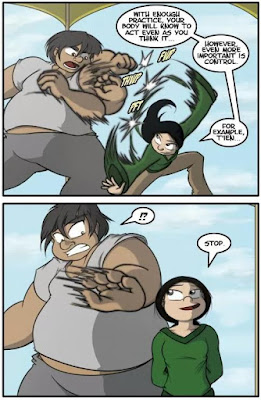 And this one to the left? Here I just wanted to point out the expression on Min's face in the second panel. I really don't know how to describe it. Happy? Confident? Amused? At ease? It's something like that, and I think it would take quite a bit of practice to reproduce reliably, even if my artistic abilities weren't otherwise terrible. 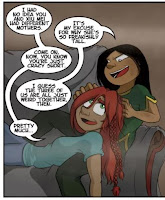 This is the last thing for Prequel. These fight scenes come up several times, and the choreography of the fight is probably the best I've ever seen. If you look at the two panels here it is abundantly clear how the characters moved from the first position to the second position. This requires quite a bit of thought to be put into the positions, and I think any comic artists would do well to learn from Ryan's and Krystle's example.


And now we get a three for one special! 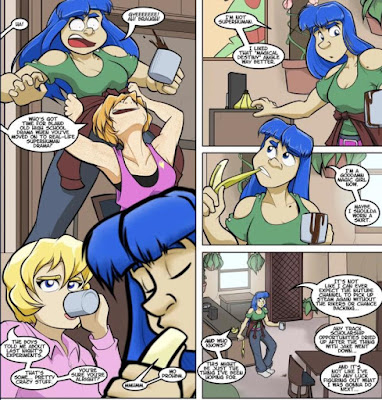 If you compare the left and right sides of the image, you will notice two cases where Sarrah, the blue haired one, extends out of the panel she occupies, but there is an important difference between the two examples. On the right side the panel is clearly defined by the usual white space with black boarders. But on the left, the white space is missing! This causes the readers eye to naturally move downward, as the panel doesn't seem to end like it normally would, and now the audience is reading the fourth panel as if it were the second! This is worthy of a sin. (edit: they corrected this)

Third thing: Sarrah has moles! Why does Sarrah have moles?! I mean I love them, but it's just such a frivolous detail! Kudos to Ryan and Krystle for including tiny things like that. Usually details like moles are reserved for more realistic depictions, where the author is trying to portray the grittiness of the world via, among other things, scars, stains, and wrinkles. I'm not entirely sure if the moles add anything story content wise here, since none of those other realism factors are present, but I appreciate them regardless.

Alright, last thing for visuals, and this time I haven't just stolen the art and pasted it here. Instead I want you to follow this link:

This is something that I hope to see more of in webcomics in general. Because webcomics exist on a digital medium, they have the ability to include various animations where appropriate to enhance the experience. This is a topic for another day, but I wanted to call it out since it's here.


All in all, Mastery's Act-1 is a good comic, and Mastery's Prequel is an amazing comic, I just wish they were either better connected, or more clearly separated. This has been Vindcara, and you can reach me at my desk.
at September 07, 2017

Email ThisBlogThis!Share to TwitterShare to FacebookShare to Pinterest
Labels: review