I recently read Galebound, a comic with considerable promise from an author who clearly know what they're doing... although it only has 74 comics as of this post and seems to be doing more of a slow story build up, so I didn't find myself getting emotionally invested enough for it to make its way onto my bookmarks bar. However, it did do a few interesting technical things that I thought were interesting. So this is the first in a series of smaller posts where I will point out specific mechanics of comics various authors employ, and how I think they might best be used. 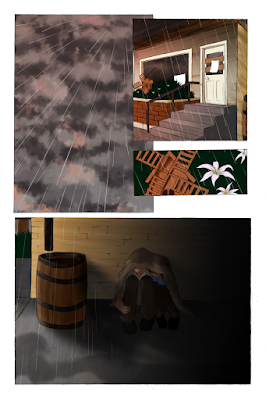 This is the  first page of Galebound, about one fifth of its normal size, and it is a good example of how 'Show, don't tell' works in comics. Even from this zoomed out view it is immediately apparent what has happend, and it is worth mentioning that the eviction notice is just displayed as a white sheet. If the author had zoomed in on the page so that we could read "eviction notice" on it, that would be telling, not showing. Between the eviction notice, the boards on the door, and the kids huddling in the alley, it can be expected that everyone in Galebound's target demographic will understand the situation, and all without anything having to be spoon fed to them, so the audience is more connected to the story.

But things get better. On top of the detail that the whole audience needs to understand, the author has added a second detail which will provide more context and characterization, but  isn't strictly necessary. The little windmill house and the garden are well maintained. The whole house hasn't been abandoned, and it wasn't housing an unhappy family. This one detail allows us to confirm, that these two kids came from a loving home, but had to leave because their parents died, not because of family financial troubles or because they were running away from home. From this we can speculate, which just makes the page all the better. 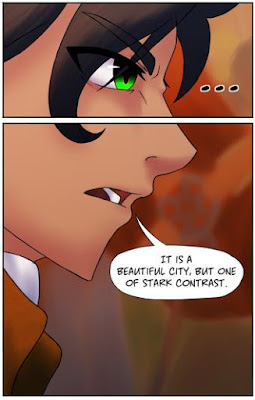 This dual-panel thing here was the second mechanic I wanted to discuss today. Quite often it is necessary to put in pauses in the dialog, commonly expressed by an ellipsis, "...". But here, the author has went further. The longer the audience pauses between sections of dialog in which there is an intervening ellipsis, the longer the pause in dialog seems. Quite often, if the ellipsis is just sandwiched between two other speech bubbles, then it will barely register, and the author quite likely wont get the thematic impact they are looking for. To solve this problem, the author of Galebound cuts what would otherwise be one panel of dialog into two. This keeps the dialog feeling fluid, as the comic's point of view doesn't change, while also providing the starkest break possible. By making the pause in dialog its own panel the author ensures it not only registers, but also feels thematically impactful to the audience. (Raspheal, the author, also uses this technique for ellipsis' at the end of dialog, to separate two beats in a conversation)

This posts recommendation is, obviously, Galebound. I am Vindcara, and you can  reach me at my desk.