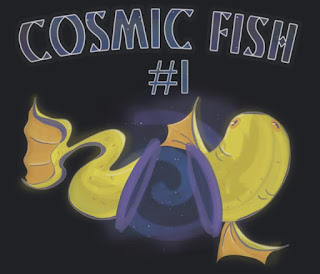 Themes: A-
Story: B
Characters: B
Comedy: B-
Visuals: B


Cosmic Fish by Eliana Falcón (AKA Cosmographia) is a sort of nonlinear fantastical mystery functioning as a mythical metaphor for choice, with time and perspective jumping around between chapters. These perspective jumps add context to the main story, while the main story itself goes through small, unknown (and unimportant?) time jumps. Because of this, the comic takes on a sort of episodic format, with certain chapters almost being stand alone if it weren't for the characterization and small amounts of mystery related info they give. Overall This does a fairly good job of enticing the reader with a decent mystery while also appropriately characterizing the main actors so that we either empathize with them, or wonder about their motives. Really, my biggest gripe about Cosmic Fish is just that there just isn't enough of it yet!

If the intro and rankings have persuaded you, then please go read Cosmic Fish immediately (and then come back). If it has not persuaded you, or you simply wish to see my analysis, then read on: 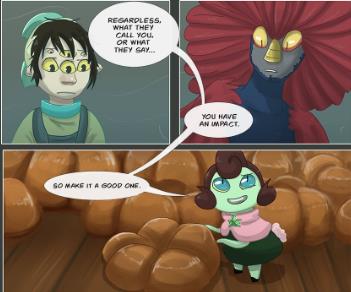 Reading Cosmic Fish, it very quickly becomes apparent that the story is meant to function something like a parable, as the magic affecting one of the main characters forces continual bodily changes which always results in turning into a raging monster, but are also affected by personal experiences. So in essence: the destination is certain, the path is uncertain, and it's your choice whether or not to make the best of things. This theme of whether or not to take charge of guiding an uncontrollable situation in a positive direction is reinforced by the second main character, Bells, who is the only one of the guiding deities of the realm who chooses to actually help those destined to become monsters as best she can, rather than ignoring or killing them. This idea of proactive optimism stretches over the entire story, and is well executed in how it plays into many different situations without being too blatant or forceful. 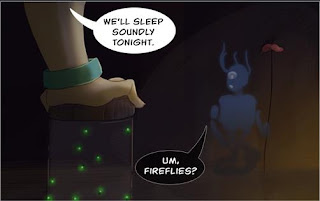 Before discussing the details and mechanics of the story proper, we need some context. In the world Eliana has created, the natural order is managed by a group of guardians. Most of these guardians are unimportant for our purposes except to serve as a contrast for Bells, the guardian of children, who reincarnates those who die too young. This ability of reincarnation, shared with the guardian of mature souls, Syias, allows bells to send ghosts back home. What are ghosts? Dunno. As far as I can tell, beings from other universes are somehow entering the one managed by the guardians, probably after somehow dying in their own universe. Left to their own devices, ghosts will form a temporary body based on the remnants of their memories (by the way they lose their memories) and their experiences soon after appearing. If Bells or Syias reaches a ghost before it fully forms a body they can send it back home. Otherwise, the ghost is doomed to slowly turn into a monster as its body continually changes. Also there's a whole bunch of other classical mythology tropes included, much of which are inconsequential. These tropes create a nice mythical atmosphere, but have the drawback of making some of the worlds magic seem arbitrary. For example: fireflies apparently do something somehow having to do with ghosts and or monsters. That's really about as much as I could figure out, it just isn't explained at all. 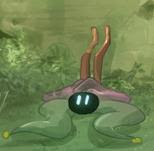 The two main characters of Cosmic Fish are Bells, the aforementioned guardian, and Acantha, a ghost. Bells is a sweetheart with an odd lack of speech. As far as I can tell, the author wished to have the benefits of a silent character, without the drawbacks, so she has all of the other characters understand Bell, but doesn't explicitly show Bell's dialog to the audience. She plays the part of an optimistic child who has to deal with tragedy and copes as best she can. Between this, and the mystery that surrounds her by virtue of her position as a guardian, she functions very well as a support character for those who are more flawed, like Acantha.

Acantha herself is far more nuanced. She used to share Bell's optimism for a better future for the ghosts, but is pessimistic in regards to her relationships with others, and it's clear that her friends turning into monsters has eaten away at her optimism. Between the main story and the various flashbacks she functions as our eyes into the world, as she seems to know the least out of all the regular characters. She is also the most expressive character, feeling wronged by pretty much everybody because of... reasons, and also being fed up with the way the world currently is. Because of this, most of the best comedy goes to her.

The other big player in the story is Schnell, a big mouthed creep and the defacto antagonist of the story so far. I say so far because while he definitely seems to be a villain, there are also hints of beings acting behind the scene who may end up being more important in the end. To be honest though, Schnell's real purpose is to act mysterious and look silly.

Beyond those three there are several other support characters who are well done, but each of them are limited to one or a few chapters, such as that tiny, green, adorable person in the second image.


The Story:
Remember when I said Cosmic Fish was a mystery? Well it's a bit more nuanced than that. Schnell clearly has a number of questions he has been working to find answers to, and Acantha has questions regarding a strange bunny that seems to travel through dimensions (that's really all we know about it), but besides those two the conundrum of the ghosts existence is mostly treated as a problem to be solved, rather than a mystery to be unraveled. Most of the mystery aspects of the comic come from the how information is only slowly fed to the reader. A good comparison would probably be those documentaries about mechanical failures. Have you seen those? Where most of the people depicted have questions, but the true mystery is only apparent from the outside, and only because the narrator gives you information in a specific order? This comic is kinda like those.

So what is the mystery exactly? well, as far as I can tell, Schnell came into the world somehow in some way which relates him to Bells, giving him some of Bells powers, and when he first showed up there was a strange woman who cared for him. Other ghosts show up for some reason, except they aren't related to Bells, and Schnell is somehow keeping them in the world in order to motivate Bells to solve some sort of mystery. Also there is a bunny that can teleport and possibly travel between dimensions, and who gave Bells a shock collar for Acantha after he broke the guardians no killing rule.
There are also these things called Cucos which eat ghosts who haven't formed a body, and they tried to eat Acantha when she first showed up. Bells at first tried to help, either before or after the Cucos showed up, but Schnell interfered somehow, and so Bells chose not to help Acantha, causing her to later fall into a river and form a body, which coincidentally has spikes on the back. Also, guardians can be killed and then they come back with no explicit memories, just ideas of the lessons they learned?
Like I said earlier, there aren't enough chapters yet. In truth, it feels like the comic is only now really getting into the meat of the story, since Bells decided to change the status quo by befriending Acantha in one of the most recent chapters.

Visuals:
For the most part, Cosmic Fish's visuals are simply compitent. They are well executed, have clear panel structure, switch between high and low fidelity as is appropriate, and overall are simply well done. There are a few points of interest however...

Taking a look at this image, I would like to draw attention to the texture work. I don't know enough about art to be certain, but I think that Eliana is using a digital paintbrush here that creates a very well executed and unique aesthetic that I really appreciate.

The other thing of note is the two videos, the transition video, and the few animations that are used throughout the comic, all of which are executed very well, and most of which are used exactly as they should be. My one and only gripe is that the two pages after the fight scene video should have been included in the animation, as that would have allowed the video to function as the climax of the action scene, rather than merely the middle of it. (that being said, there is also the advantage of a higher fidelity splash page at the end of the combat, and if a sufficiently impactful animated ending was not possible then this was the best choice.)

Overall, Cosmic Fish is a very interesting comic with a mystery and character relationships that I am excited to see play out, and it has earned a place on the List of Awesome. I am Vindcara, and you can reach me at my desk.
at October 12, 2017 1 comment: